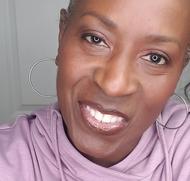 Gail's acting career began in grade school. But, she developed a love for voice over and narration in the late 1990s. Having trained with some dynamic vocal coaches in San Francisco and Dallas, Gail had a vision to become a vocal powerhouse; able to offer her voice to audiobooks, commercials and other projects where a warm and sincere tone were needed. Narrating books for Audible and iTunes has been the best platform to live this dream.

jane of all trades

As a Southern girl, Gail has always had a panache for telling a story. That skill, coupled with acting experience, allows her to loan her voice to projects for self-published writers with works in ACX which is owned by Amazon. In addition, Gail has been successful in positioning herself as an Influencer on various social media platforms -  with over 100K followers (collectively).

Gail has had the priviledge of co-starring on a couple of TV series and has had multiple, principal roles on commercials and movies. She has representation from several agencies and has partnered with a variety of brands to represent their products as an over 50 influencer. She lives in the Houston area.